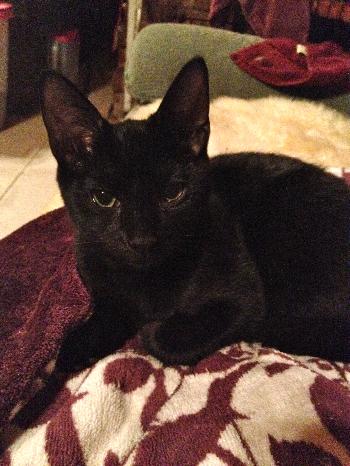 In the Fall of 2011, I had decided I was ready to adopt 1 or 2 cats. As much as I love kittens (who doesn't?!), I wanted to get slightly older kitties, who might otherwise get looked over. I have had 2 dogs, a Siberian Husky & a Miniature Pinscher, going on 13 & 11, respectively, since they were puppies. You'd think that be enough for any rational person! But, I also know that I am a perfectly capable adult & why shouldn't I open up my home to 1 or 2 kitties who needed one? So, I began my search, looking online at the different rescues & shelters, & even met one cat I was interested in, but we just didn't "connect" the way I knew we should. I kept my search going, but not too seriously. On December 23, 2011, I wandered into the Cary Petsmart to get some treats & toys to give to my dogs for Christmas. In my usual fashion, I walked over to see the kitties up for adoption & noticed that Tracey happened to be in there, cleaning. My usual reserved self decided to open that door right up & ask her if I could visit with some of the kitties. Tracey was so nice & welcomed me right in! There were so many sweet cats & kittens there! Of course, the 2 little tabby kittens melted my heart - but I knew they would get a home in no time. Then I met Prescott (now Jasper) & as soon as he was in my arms, I knew he was the one for me. He was only 5 months at the time, so a bit younger than I was looking for, but when you know, you know! Now came the hard part of deciding if I would take a 2nd kitty home, & if so, WHICH ONE?!? There were 3 that appealed to me - none of which I connected with as instantly as I did with Jasper. I went home to think about it overnight, & let Tracey know that I would absolutely be back for Jasper, but I needed to figure out who would be the best buddy for him. I came back the next day, Christmas Eve, which also happens to be my birthday. I brought reinforcements to help me choose, my mom & her sister. They "rationally" suggested that I just take Jasper home since I couldn't decide on one of the other 3 I was considering. I thought, sure - that's reasonable! That's what I will do! And then they left... I put Jasper in the large crate I had brought (larger than a typical cat carrier). But then, Chanel (now named Jezebel) immediately went over to the crate, peering inside, almost a bit anxious about why he was in there & where he was going. I felt like that was my sign, as she was one of the 3 I was torn between, anyhow, plus she was his mother's sister, so they are related! I decided that she would come home with us as well! They are the best of friends & I can't imagine how lonely Jasper would be if I hadn't brought Jezebel home with him! We had some growing pains at first (none with the dogs, believe it or not!), but it wasn't long before I couldn't even imagine my life without them! I feel like my family is complete, & they bring me so much happiness on a daily basis! Jasper is my little misfit, but also the sweetest little cuddlebug! Jezebel is still a bit timid, but she has come a long way - I call her my Miss Priss, because she is so fluffy & dainty, the way she saunters around & quietly mews! They are so different, but they love each other so much, & when they're not tearing around the house after one another, they're curled up with one another, bathing eachother, or staring out the window together. Most people think I'm nuts for having 4 animals, but I couldn't be any happier! I am so grateful that I walked into Petsmart that day, & that Tracey was there, otherwise I never would have gone in & met my babies. I would have admired all the cats from outside the glass as I always had (& still do!), & then gone about my shopping. Thank you Paws of Hertford County, for bringing these sweet angels into my life! - Maureen Murphy 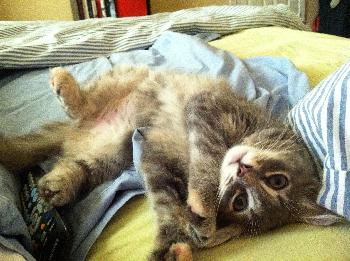 "My husband and I got married in June of this year. For months prior to the wedding, we talked about how we would adopt a kitten after we were married and more settled. We even had her name picked out already...we just had to find her! I happened to walk into the pet store in Cary one day and saw all the PAWS kitties. That's when I spotted her. "That's Harriet," I thought! Later that day, I brought my husband to pet store and we had a chance to meet her. That's when I found out she was from Hertford county. My mom grew up in Hertford county and we still go back occasionally to visit family. I felt like it was fate...this was the kitten we had been waiting for! We took Harriet home and she has settled in just fine. She is the perfect companion, never to far from where we are and loves to snuggle. She is sleeping beside me as I write this story! She was the perfect addition to our new family! Thanks for everything, Tracey!" - Sara Balzer 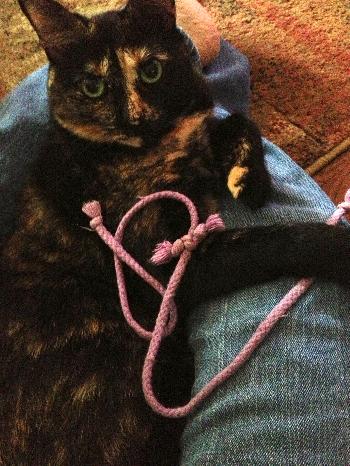 "I had stopped at PetSmart for bird food one afternoon and there I met Tracey. She had quite a few kitties but one in particular caught me eye. I had recently lost my cat of 10 years & wasn't sure I was ready for another but "Jubilee" kept coming to mind. So after a phone call & paperwork, I became the proud parent of "Jubilee." Her name is now Callie and we have settled into a wonderful routine. My most favorite of which is our early morning & after work string time. You'll see in her picture that this simple purple string is her favorite toy. I have to sit on the floor and play with her or she will follow me around with it in her mouth until I do!" - Shirley ODonnell 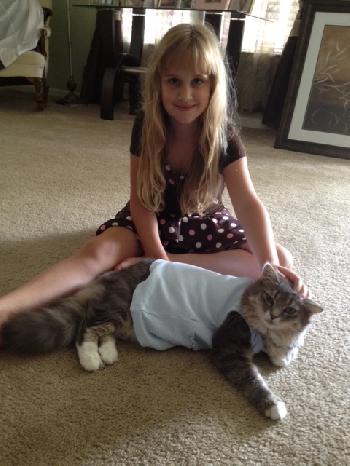 "Hey Tracey! We adopted Marvin back in December. He has TRULY come around and been such a blessing to our family! And he loves my daughter enough to let her dress him up!" - Joy. And from Tracey - "Marvin was one of my shy foster cats. When he first came to me, it took weeks for him to let me touch him. What a heart-warming wonderful story. He now adores being cuddled and loved on. It is amazing what love, patience, persistence and gentleness can do. Thank you, Joy and family!" 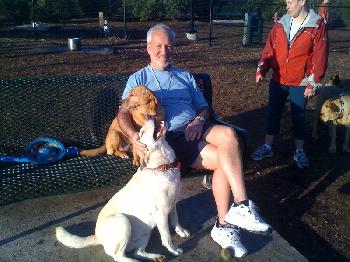 We brought Sunny home as a foster dog and introduced her to our other dog family member, Allie, and our cat, Keiki. Sunny is a yellow lab female about three years old. She bonded quickly and after a couple of weeks, we decided to adopt her into our family. Sunny is a very loving, intelligent dog who learned her “house manners” very quickly. We have been taking Sunny to the Cary dog park twice each day where she loves to retrieve her ball, chase other dogs and meet new people. She has been fantastic with both other dogs and people. We hadn’t planned to have another dog, but we’re pleased that we were introduced to Sunny as foster parents and are able to give her a loving home so different from her first two years of being chained up and neglected. - Ken Keeler
Next Page »
Click a letter to find an animal or view all.
A | B | C | D | E | F | G | H | I | J | K | L | M | N | O | P | Q | R | S | T | U | V | W | X | Y | Z
Support
PAWS of Hertford County