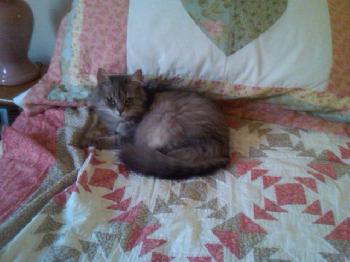 After losing our dear Persian cat Missy my wife and I discussed searching for another Persian cat. Following a search on PetFinders.com I saw a picture of Heather. She is a Persian / Maine Coon mix. After a phone discussion with Catherine at PAWS we made a trip to the facility to see Heather in person. She had been at the shelter for a few months and I was initially concerned that her time at PAWS may have affected her negatively. Nothing was further from the truth! After spending some time with this beautiful little lady we invited her to come home and spend the rest of her life with us. After a pleasant ride home to Virginia Beach she adjusted almost immediately to us and our apartment. "Lady Heather Moriah" is the most loving and gentle cat I have ever had the pleasure of knowing. She loves her new home and we could not be happier with our choice to adopt her. She loves everyone. She looks forward to us coming in the door each and every time. She has had her first bath and has been intoduced to her new friends at the veterinarian's office for an initial check-up. She is healthy and happy and we absolutely love our new family member. As you can see by the pictures, she is lovely and enjoys all the attention we give her. She enjoys laying on the couch and hugging on me and giving me kitty cat kisses. She has new toys to play with and spends lots of time watching the birds and squirrels who stop by my bird feeder on our patio. PAWS did a great job of working with us and giving us all the time necessary to make the choice. It was the right choice and I thank all of the caring people at PAWS for taking such great care of her while she waited for us to discover this precious young lady. Larry & Beverly Hatch Virginia Beach, Virginia

From Jim King: "This is newest new member of our family Henry. (You knew him as Harvey when he was at the shelter). We adopted him from PAWS on April 14,2009. At the time he was adpoted we were told that he was about 7 months old. That put his birthdate in August, 08. Since my birthday is August 21, Henry and I celebrate our our birthdays on the same date. Enclosed you will find pictures of Henry with most of our family. Chris (my son) is missing as he is the photographer. We hope you enjoy the pictures of Herny celebrating his first birthday (sitting at the kitchen table with his cake and ice cream). You will also find a picture of Dixie (the white german sheppard) that my son Jamie adopted from PAWS about 2 years ago. They (Jamie and his wife Melissa, Dixie, Macy, another PAWS puppy, and a new kitten Sassy, a PAWS kitten adopted at Heritage Day) live next door to us so when everyone is together at is like a PAWS family reunion. Thanks for helping us add so which to our families in so many ways."

Sallie Eure writes: "Sandy (formerly known as "Hennie") is adjusting well to her new home. She's such a sweet dog. She enjoys "guarding" (lying around on) the porch, gazing in the front door, and playing with her new doggie pal Abel and people pal Sarah Grace. Thanks PAWS! We love her."

Look at these two happy cats! Hershey and Callie were adopted last fall by Daniel McCamish. Daniel writes: "These two cats came into my life last Summer. For several weeks I visited them in their cages as a volunteer at PAWS. In September I assisted with an adoption booth at the Ahoskie Heritage Day festival. After a long hot day of entertaining children they still had not been adopted. Instead of going back to the shelter they went home with me. Now they enjoy a ten acre litter box with lots of trees to climb, rodents to chase, and a two hundred year old farmhouse to explore. Hershey was hiding a surprise in his fur which became apparent this Spring. All the hair lightened from black to a rusty brown except for dark points on the ears, face, feet and tail. I suspect that one of his grandparents was a Siamese. When he sits upright, his profile is like that of an Egyptian cat statue. Callie is a most efficient hunter. The other day she had something in her mouth that looked like a mouse but it was hissing more like a possum. She brought it straight to me. The little bat flashed sharp needle-like teeth and fought for its life before extending soft pointed wings and flying away into the night. I'm glad PAWS is there to give people who enjoy animals an opportunity to meet one another and work together in their care."